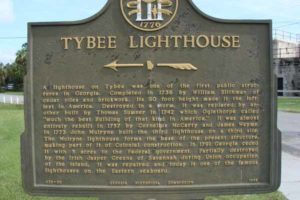 This week’s #MarkerMonday highlights the history of the Tybee Island Lighthouse, also referred to as the Tybee Island Light Station. When Oglethorpe established the City of Savannah in 1733 on the Savannah River bluff, he placed an outpost on Tybee Island to guard the mouth of the river and to guide incoming ships to the port of Savannah. The first two daymarks, a day time navigation aid, to occupy the island were destroyed by storms and shoreline erosion in 1736 and 1741 respectively. In 1773, Tybee Island’s first true lighthouse was built further inland to replace the daymarks. 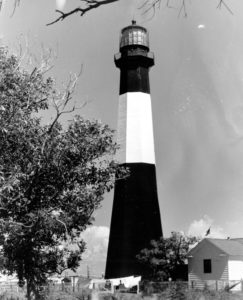 During the Civil War, Tybee Island was occupied by the Confederates until 1862 when they were forced to retreat to Fort Pulaski. During the Confederate’s retreat, they burned the top portion of the lighthouse and removed its glass lenses to render the construction useless to the United States Army. The lighthouse tower was later reconstructed following the war atop the pre-existing foundation, but was damaged again during a hurricane in 1871. During repairs to the structure, the bulk of the wooden elements were replaced with iron. A staff of three keepers was necessary to operate the lighthouse until 1933, when the tower was fitted for electricity reducing the staff to a single light keeper. The United States Coast Guard took over the operation of the United States’ lighthouses in 1939 and occupied Tybee Island Light Station until the relocation of their base to Cockspur Island in the 1980s. Despite moving their base, the Coast Guard continued to service the light and glass lens. The lighthouse and support structures were transferred from federal ownership to the Tybee Island Historical Society in 2002, however, the Coast Guard continues to maintain the lamp and lens.

Explore the links below to learn more about the history of the Tybee Island Lighthouse.

Tybee Island, Georgia Light House Act, Acts of the Assembly, Colony of Georgia, RG 49-6-1, Georgia Archives. (In 1755, Royal Governor John Reynolds signed the Light House Act to raise funds for the upkeep of the lighthouse on Tybee Island by imposing a shipping tax.)