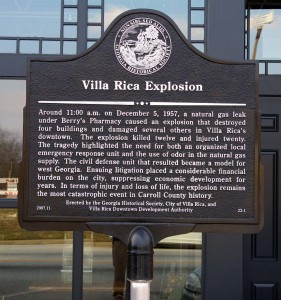 Today’s #MarkerMonday highlights the tragic Villa Rica Explosion, which occurred on December 5, 1957. At approximately 11:00 AM that morning, a natural gas leak under Berry’s Pharmacy resulted in a devastating explosion. The impact destroyed multiple buildings and damaged several others in Villa Rica’s downtown district. Twelve people lost their lives and twenty more were injured. The disaster demonstrated the need for a more developed emergency response unit at the local level and the use of odor in natural gas. The explosion had a lasting economic impact on Villa Rica, heightened by the financial burden that the resulting litigation placed on the city.  The explosion made national news and remains the most disastrous event in Carroll County history regarding loss of life and injury.

Explore the links below to learn more about the Villa Rica Explosion.