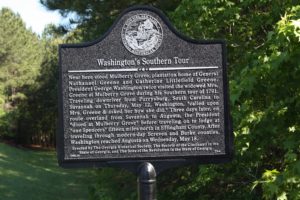 This week’s #MarkerMonday highlights President George Washington’s Southern Tour in 1791. His purpose was to unite the newly-formed nation after its establishment under the Constitution, and to learn more about the individual states. Washington tried to familiarize himself with political sentiments, economic production, and geographic regions. The previous year, he visited the New England states with a similar mission. He began the Southern tour in Savannah, Georgia, and although Washington had never been to Georgia, he already had personal connections to the state. 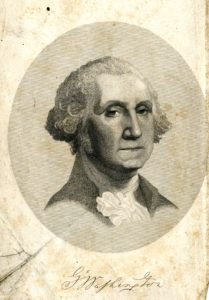 During the American Revolution, George Washington became fast friends with one of his generals, Nathanael Greene. Greene’s wife, Catharine, visited him at his encampments and headquarters while he was engaged with the war and also befriended Washington. After the war, Georgia thanked Greene for his service with a land grant near Savannah. The family moved there in 1785 and established Mulberry Grove Plantation. General Greene passed away the next year, leaving Catharine a widow on the plantation. When the President came to Savannah in May 1791, he stopped by Mulberry Grove twice to visit his old friend.

On May 12th, before the tour’s festivities officially began, Washington went up the Savannah River and docked at Mulberry Grove to spend a day with Catharine Greene. Then, he visited Savannah for three days. The last day there Washington was “escorted beyd. the limits of the City by most of the Gentlemen in it.” He returned to the plantation that day to dine with Greene one last time. Then, he began his journey through Waynesboro to Augusta.

Explore the links below to learn more about Washington’s Southern Tour, Nathanael and Catharine Greene, and Mulberry Grove Plantation.

GHS is proud to house an invitation to the dinner in honor of President George Washington on May 12, 1791 which was the president’s first banquet in Savannah. GHS contains several portraits of George Washington, and the collection also houses the Nathanael Greene Papers.

The Georgia Historical Quarterly has published an article about George Washington’s visit to Mulberry Grove Plantation which can be accessed on JSTOR. If your library does not have access to JSTOR, you can go to www.jstor.org and create a free MyJSTOR Account.