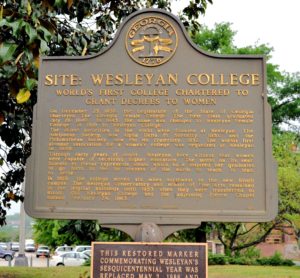 Today’s #MarkerMonday highlights Wesleyan College – the first college to grant degrees to women. In 1835, a group of businessmen in Macon, Georgia gathered to discuss the creation of a local all-women’s college. The city proceeded to raise $9,000 for the construction of the school. At the time, developing religious ideals associated with the Second Great Awakening advanced women’s access to education, which resulted in the school having a close affiliation with the Methodist Church from the beginning of its conception. On December 23, 1836, the Georgia General Assembly granted a charter for Georgia Female College. It was later renamed Wesleyan Female College after John Wesley, founder of the United Methodist Church, in 1843. The word “female” was removed from the name in 1917.

Wesleyan prides itself on its “First for Women” philosophy. This is demonstrated by both the institution’s dedication to providing women with the best education possible and the many “firsts” it can claim. For example, the first modern sorority, Alpha Delta Pi, was founded at Wesleyan in 1851. Phi Mu Fraternity was established at the institution one year later. The first women from Georgia to receive a Doctor of Medicine degree and argue a case before the Supreme Court of Georgia were both Wesleyan alumnae. The school still holds a well-known and valued place in the nation’s female college community.

Explore the sources below to learn more about Wesleyan College.

GHS houses multiple primary source materials related to Wesleyan College, including a scrapbook made by Mary Read – a Wesleyan student from 1921-1922. The scrapbook can be referenced at . To find more Wesleyan materials search our online catalog.