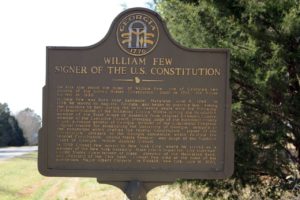 This week’s #MarkerMonday highlights the life of William Few Jr., one of Georgia’s two signers of the United States Constitution. Born near Baltimore, Maryland, to Mary and William Few Sr. on June 8, 1748, Few and his family moved to North Carolina when he was ten years old. While living in North Carolina, Few, his father, and one of his brothers began to associate themselves with the “Regulators,” a group of frontiersmen who opposed the royal governor. In 1771, the Regulators planned an armed uprising against the North Carolina militia. Few’s brother was hanged because of his participation and the family farm was destroyed, causing the family to flee to Wrightsboro, Georgia. Few remained in North Carolina to settle his father’s affairs and joined his family in Georgia in 1776. Although Few was largely self-taught and had little formal education, he won admittance to the bar and set up his own law practice in Augusta. During the American Revolution, Few supported the patriot cause, serving as Lieutenant-Colonel of the Richmond County Militia and fighting at the Battle of Burke County Jail. 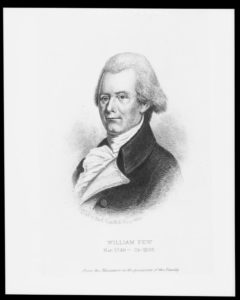 During the war, Few was also elected to serve in Georgia’s provincial congress and attended the state’s constitutional convention in 1777. In the 1780s, Few was appointed to the Continental Congress by the state legislature. During this time, he served as one of Georgia’s delegates to the convention in Philadelphia, Pennsylvania, which drafted the United States Constitution in 1787. One of two Georgia delegates to sign the Constitution along with Abraham Baldwin, Few played an important role in securing Congress’ approval of the new Constitution by casting his vote in favor and lobbying other congressmen before it was sent to the states for ratification. He also took part in Georgia’ s special convention to ratify the United State Constitution. He later served as a U.S. senator, one term as a state representative, and as judge of the Second Judicial District in Georgia. Few moved to New York in 1799, where he continued his political career serving in many as a member of the New York Assembly and other elected positions. Few died in July 1826 and was buried in a local Reformed Dutch Church cemetery. In 1976, his remains were reinterred at St. Paul’s Church in Augusta, Georgia.

Explore the links below to learn more about the life of William Few Jr.

GHS is proud to house a letter from William Few endorsing William Hervey as a candidate for the position of auctioneer in the city and county of New York in 1803.

Georgia Stories: Georgia and the US Constitution

The Georgia Historical Quarterly published an article related to William Few which can be accessed on JSTOR. If your library does not have access to JSTOR, you can go to www.jstor.org and create a free MyJSTOR Account.