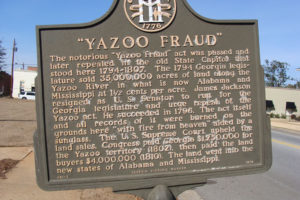 This week’s #MarkerMonday highlights how the Yazoo Land Act galvanized Senator James Jackson, who in response resigned his U.S. Senate seat and ran a successful populist campaign for a position on the Georgia General Assembly.  The so called “Yazoo Land Fraud” involved the Georgia Legislature’s sale of 35,000,000 acres of land in the Yazoo River-area for a scant $500,000 to four land companies in which many legislators owned shares. On January 6, 1795, the day before Governor George Matthews signed the bill, U.S. Senator James 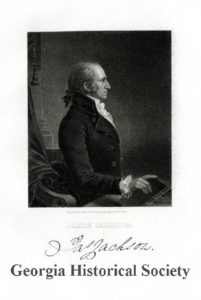 Jackson expressed his displeasure with what he called “a confiscation Act of the [land] rights of […] unborn Generations, to supply the rapacious graspings of a few sharks”.  He further wrote, “Our Constitution breathes Republican & equality principles – Our Legislature, acting under it, establishes Aristocratic Bodies.” In the same letter, Senator Jackson expressed his hope that a future Georgia General Assembly would nullify the act.

The Yazoo Land Act became a point of vitriol. So incensed were some Georgians that crowds descended with ropes upon members of the legislature who supported the sale, and legislators went into hiding. Senator Jackson, a Democratic-Republican who believed in a strong state government and representation of the citizenry, had his own answer: he resigned as a U.S. Senator in 1795 and ran for the Georgia Legislature on a platform to nullify the sale. 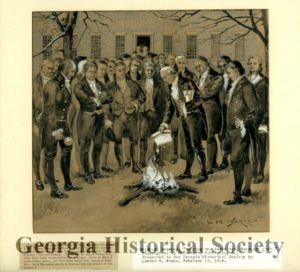 Candidates who supported rescinding the bill won huge victories in Georgia, among them James Jackson, whom Chatham County elected as a state representative. The Georgia General Assembly then declared the act void, and on February 13, 1796, Georgians came to watch as Jackson and his colleagues burned the act and all records of it. However, the United States Supreme Court later ruled that rescinding the sale was unconstitutional.

Explore the links below to learn more about James Jackson and the Yazoo Land Fraud.

The life of Major General James Jackson by Thomas U. P. Charlton

The Georgia Historical Quarterly published articles related to James Jackson and the Yazoo Land Fraud which can be accessed on JSTOR. If your library does not have access to JSTOR, you can go to www.jstor.org and create a free MyJSTOR Account.