In honor of the 2016-2017 Georgia History Festival, “A State of Innovation,” the September #MarkerMonday posts will focus on Georgia historical markers that tell the story of James Edward Oglethorpe and the founding of the colony of Georgia. Over the course of the month, these posts will delve into General Oglethorpe and his innovative approach to founding the colony of Georgia. 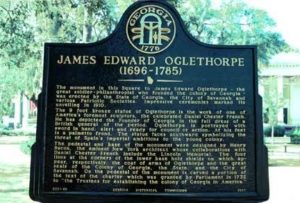 The week’s #MarkerMonday highlights the innovator who founded the colony of Georgia in 1733, James Edward Oglethorpe. Born in London in 1696, Oglethorpe was educated at Corpus Christi College at Oxford University. He gained valuable military experience in the Austrian army during the Austro-Turkish War of 1716-1718. In 1722, Oglethorpe successfully ran for Parliament and chaired a parliamentary committee charged with prison reform. Inspired by his committee work, Oglethorpe and a group that became the Georgia Trustees approached King George II to start a new North American colony as a haven for the destitute and the poor. The colony would serve as a philanthropic and military enterprise by providing the “worthy” poor a new start, while also serving as an additional buffer between Spanish Florida and the English colonies. 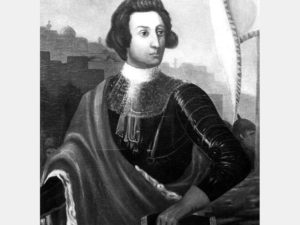 In 1732, Oglethorpe and the first colonists sailed for North America with a charter from King George II, arriving in February 1733. While Georgia’s charter prohibited him from holding office, owning land, or receiving a salary in the new colony, Oglethorpe served as unofficial governor for 10 years, working tirelessly to ensure political, military, and economic stability. After repelling a Spanish attack in 1742, Oglethorpe left for England the following year never to return. Once back in England, Oglethorpe met and married Elizabeth Wright and resumed his military career under the British crown. He also remained involved with the Georgia Trustees Board until 1750 and was interested in American affairs. Weeks before his death on June 30, 1785, Oglethorpe the only surviving colonial founder, met with John Adams, the first Ambassador to Britain from the now independent United States of America.

Explore the links below to learn more about James Oglethorpe and Georgia’s colonial history.

James Oglethorpe is one of GHS’ Featured Historical Figure for the 2016-2017 Georgia History Festival. Be sure to check out GHS’ online learning materials.