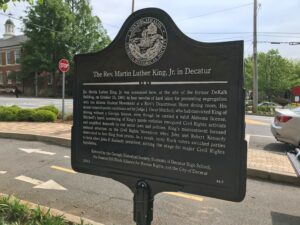 April 27, 2021, Atlanta, Georgia – The Georgia Historical Society, in conjunction with students of Decatur High School, Beacon Hill Black Alliance for Human Rights, and the City of Decatur, has announced the dedication of a new Civil Rights Trail Historical Marker in Decatur to commemorate the sentencing of Dr. Martin Luther King, Jr. to four months of hard labor following his arrest during the Atlanta Student Movement protest at Rich’s Department Store in October 1960.

The historical marker project was largely led by students from Decatur High School and supported by community groups that helped to raise the necessary funding. As part of the marker project, students created a research paper and conducted oral histories of those who were eyewitnesses to Dr. King’s trial that were submitted as part of the marker application to the Georgia Historical Society. Students from Decatur High School also created a video documenting MLK’s arrest and sentencing, as well as the commemoration project that culminated in this weekend’s unveiling. The Commemorating King Team includes the DHS students, teachers, and community mentor Mike Warren, with additional support from the DeKalb History Center, the City of Decatur, the Beacon Hill Black Alliance for Human Rights, and the Decatur Visitors Center. The Commemorating King team also created a brochure with supplemental information that is available to the public.

“The arrest of Dr. Martin Luther King, Jr. in Decatur was a pivotal moment in the Civil Rights movement that needs to be publicly recognized and better understood,” said Dr. W. Todd Groce, President and CEO of the Georgia Historical Society. “What makes this marker truly special, however, is that it was created by high school students. Their passion for history and their commitment to telling and interpreting this story is not only inspiring, it will also help shape a better future for this community and our state.”

The marker was dedicated in a private ceremony on Sunday, April 25, at the corner of McDonough Street and Trinity Place—the former site of the DeKalb County Civil and Criminal Court and Jail.

Dr. Martin Luther King, Jr. was sentenced here, at the site of the former DeKalb Building, on October 25, 1960, to four months of hard labor for protesting segregation with the Atlanta Student Movement at a Rich’s Department Store dining room. His arrest violated parole conditions set by Judge J. Oscar Mitchell, who had convicted King of driving without a Georgia license, even though he carried a valid Alabama license. Mitchell’s harsh sentencing of King’s parole violation energized Civil Rights activists and amplified demands to end racist laws and policies. King’s mistreatment focused national attention on the Civil Rights Movement when John and Robert Kennedy intervened to free King from prison. As a result, many Black voters switched parties to help elect John F. Kennedy president, setting the stage for major Civil Rights legislation.