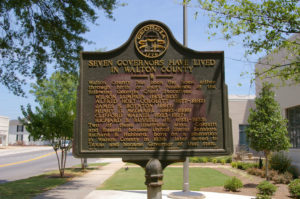 To highlight this year’s Georgia History Festival theme, “Tear Down This Wall: Georgia in Cold War America,” this week’s #MarkerMonday will look at the Seven Governors Have Lived in Walton County historical marker in Monroe, Georgia. Richard B. Russell, Jr. is one of the Governors (1931-1933) who lived in Walton County. During his term as Governor of Georgia, Russell was elected to the United States Senate in 1932. He served as a senator until his death in 1971. During his time as senator, Richard B. Russell played a large role in American agriculture by supporting legislation such as the Rural Electrification Act, writing the National School Lunch Act, and bringing agricultural research opportunities to Georgia. He is also remembered for his influence on military and civil rights politics, during the multiple wars of the Cold War era and the Civil Rights Movement.

Early in his senate career, Senator Russell opposed desegregation legislation. He used his understanding of Senate rules and procedures, becoming known as a “Senator’s Senator,” to block bills promoting civil rights. Later, in response to the Brown v. Board of Education ruling, Russell co-authored the “Southern Manifesto” that accused the Supreme Court of abusing its power and challenged its decision as unconstitutional in 1956.

As Chairman of the Armed Services Committee from 1951 to 1953, during the Korean War, and again from 1955 to 1969, during the Vietnam War, Russell was a powerful voice on defense issues. Although he disapproved of the United States’ involvement in wars that did not have a direct impact on U.S. affairs, he was an advocate for the military’s strength and its members. He was also the ranking Democratic member on the Joint Committee on Atomic Energy and the Committee on Aeronautical and Space Sciences, which oversaw the National Aeronautics and Space Administration (NASA)—both established in 1958.

The Georgia Historical Quarterly has published an article relating to Richard B. Russell, Jr. which can be accessed on JSTOR. If your library does not have access to JSTOR, you can go to www.jstor.org and create a free MyJSTOR Account.