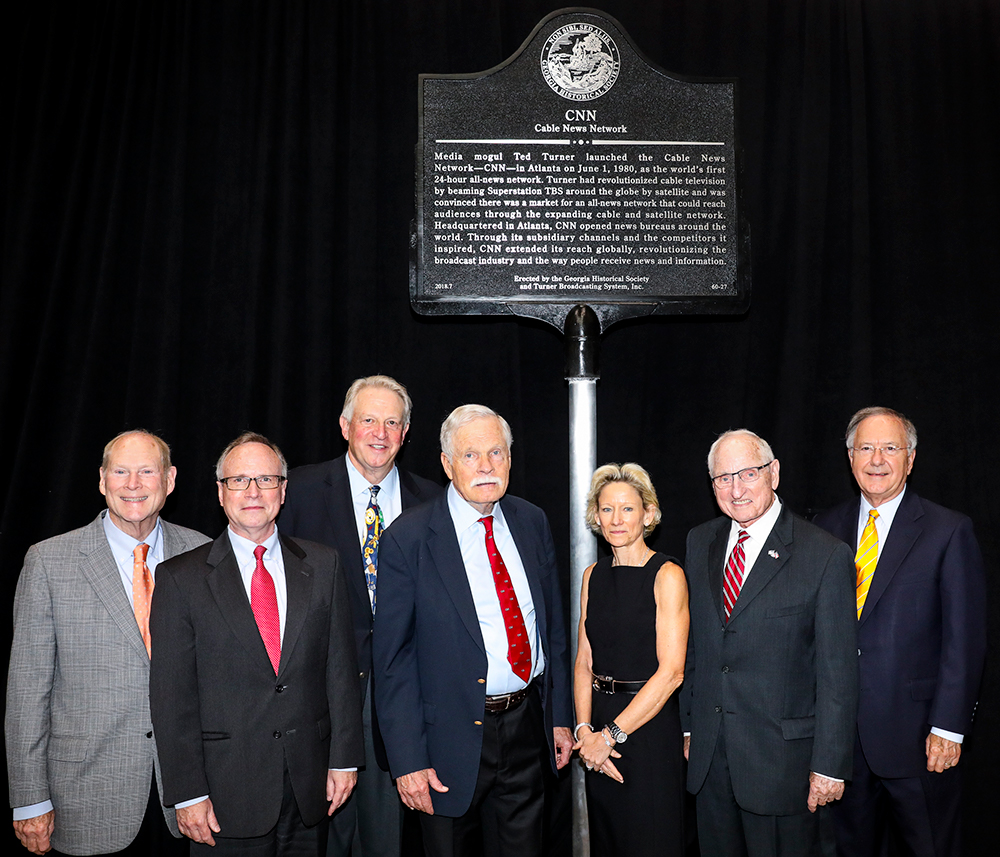 “This place will always feel like home, and it’s good to be back.”

ATLANTA, May 24, 2018 – The Georgia Historical Society was pleased to dedicate a new Georgia Business History Initiative historical marker recognizing CNN and visionary founder Ted Turner. The marker was unveiled in a private ceremony at the CNN Center that was attended by friends and family of Turner along with hundreds of CNN and Turner Broadcasting employees.

“When Ted Turner personally launched CNN’s first broadcast on June 1, 1980, he forever changed the way the world received its news,” said Dr. W. Todd Groce, President and CEO of the Georgia Historical Society. “We at GHS are proud to honor Ted and to induct CNN into the Georgia Business History Initiative.”

Of CNN’s Atlanta roots, Turner said, “So many memories have been created here… I’m thrilled that almost 40 years later, tourists continue to flock to CNN Center to learn more about this global network’s humble beginnings and to witness history in the making. This place will always feel like home, and it’s good to be back.”

“CNN Center is not just a building. It’s also a symbol of this company’s investment in Atlanta and this community.” said Sams.

Each year, the Georgia Historical Society recognizes iconic companies in the state to teach Georgia students, citizens, and tourists alike about the pivotal role of the state’s leading businesses in the economic, cultural, and social development of Georgia and the United States.

Media mogul Ted Turner launched the Cable News Network—CNN—in Atlanta on June 1, 1980, as the world’s first 24-hour all-news network. Turner had revolutionized cable television by beaming Superstation TBS around the globe by satellite and was convinced there was a market for an all-news network that could reach audiences through the expanding cable and satellite network. Headquartered in Atlanta, CNN opened news bureaus around the world. Through its subsidiary channels and the competitors it inspired, CNN extended its reach globally, revolutionizing the broadcast industry and the way people receive news and information.