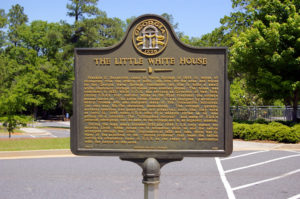 This week’s #MarkerMonday shines a light on the Little White House, the Georgia home of President Franklin Delano Roosevelt. In 1924, President Franklin D. Roosevelt began visiting Warm Springs, Georgia, in hopes of using the natural warm springs to recover from the effects of polio. Roosevelt saw improvement through physical therapy in the springs, and invested his own money into a treatment center, founding the Georgia Warm Springs Foundation (now the Roosevelt Warm Springs Institute for Rehabilitation) in 1927. The Foundation and his love of the area led Roosevelt to build a small cottage for himself in Warm Springs. 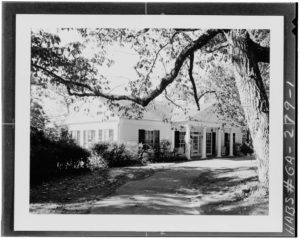 Completed in 1932, while Roosevelt was Governor of New York, the house was later known as “The Little White House” upon Roosevelt’s election as President. Whenever he visited Warm Springs, Roosevelt also travelled the countryside and visited with Georgians. The people largely accepted Roosevelt as one of their own who understood the hardships they faced. He drew from these experiences for solutions put forth through New Deal legislature. From 1924-1945, Roosevelt made 41 visits to Warm Springs, however, visitation grew infrequent between 1932-1945. On April 12, 1945, Roosevelt was sitting for a portrait at the Little White House when he complained of a headache and fainted, never regaining consciousness. President Roosevelt died that afternoon from what was determined to be a cerebral hemorrhage. He is buried on the grounds of his estate, Springwood, in Hyde Park, New York.

Explore the links below to learn more about the Little White House and President Franklin D. Roosevelt.