This week the Georgia Historical Society highlights the newest Georgia Historical Marker, The Riot of May 11-12, 1970, in Augusta, Georgia. In consideration of social distancing precautions, the marker’s sponsors, The Lucy Craft Laney Museum of Black History and The Augusta Riot 50th Observance Committee are participating in a virtual rollout of the historical marker in lieu of an in-person marker dedication.

In today’s Collection Highlight, written by Corey Rogers, a member of the Augusta Riot 50th Observant Committee and historian at The Lucy Craft Laney Museum of Black History, we look at the work of activist and politician, Grady Abrams.

One of the pivotal figures in the story of the 1970 uprising in Augusta is Augusta-native Grady Abrams. Mr. Abrams had a very diverse professional career, working as a math instructor at his alma mater, Lucy Craft Laney High School, , and then later as a top-selling insurance agent with Metropolitan Insurance Company. He left Augusta for a short stint before returning to work for the next 27 years at Bechtel Savannah River, Incorporated, as labor relations manager.

Mr. Abrams was born into the segregated South, but his community boasted some of the best schools for African Americans at that time. He was educated at C.T. Walker Elementary School, the aforementioned Lucy Craft Laney High School, and Paine College, the only historically Black college located in Augusta. 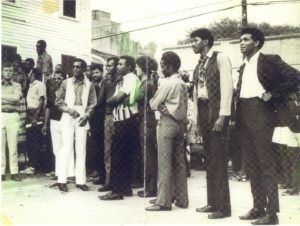 Of all of his life pursuits, Mr. Abrams’ legacy is firmly tied to two things: his love of painting and community activism. The latter found him in the middle of a turning point in Augusta’s history: The uprising of May 11-12, 1970, remembered by most as the 1970 Augusta Riot. Mr. Abrams was one of a few African-American city councilmen at the time of the riot. In fact, Mr. Abrams formed a grassroots watchdog group dubbed by the local media as “The Committee of Ten.” Led by Mr. Abrams, Leon Larue, and other activists, the Committee of Ten initiated social action measures that included voter registration drives and community rallies that called attention to the problems plaguing many of the African-American communities in Augusta. After viewing the badly beaten body of 16-year-old Charles Oatman, Mr. Abrams took to the airwaves to inform the Augusta community of what he observed at Mays Mortuary on May 9 and to put the city leaders on notice. Two days later Mr. Abrams and other activists would find themselves in the middle of a riot that would garner national attention.

During the latter portion of his life Mr. Abrams became thoroughly immersed in his love of painting, and his paintings demonstrated his love of humanity. Always one to push the envelope and be the provocateur, he often tackled subjects others refused to talk about. One such piece brought together one of the biggest proponents of segregation in 20th-century politics, South Carolina senator Strom Thurmond, and his African American daughter, Mrs. Essie Mae Washinton-Williams. 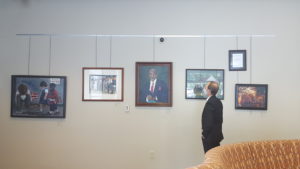 The Grady Abrams Retrospective exhibit, featuring The Committee of Ten painting, is currently on display at The City Gallery in Augusta. Image courtesy of Pax Bobrow.

Mr. Abrams loved the Lucy Craft Laney Museum of Black History. In fact, several of his original pieces of art are on permanent display at the museum. One piece in particular is based on an iconic photo taken of Mr. Abrams and other members of the Committee of Ten around the time of the 1970 Augusta Riot. Mr. Abrams can be seen in the photo and painting towards the middle of the group, smoking a cigarette. This is one of the most recognizable images from the 1970 Augusta Riot.

To learn more about Mr. Abrams and The Lucy Craft Laney Museum of Black History, please follow this link.

The Goulding Table: A Nineteenth Century Tale of Twists and Turns