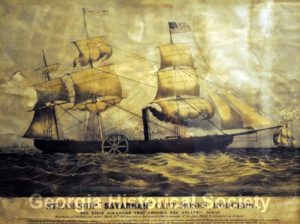 June 17, 1819: Spotted off the coast of Ireland, a ship was billowing smoke. Immediately identified as a vessel in distress, aid was dispatched. Impossibly fast for a ship on fire, the ship evaded its rescuers, leaving them no choice but to fire several shots in an attempt to grab the attention of the “distressed” ship’s crew. Imagine the surprise of those rescuers who discovered that the ship was not on fire but was actually a naval wonder, a sea-faring steam ship flying an American flag. A combination of sails, steam engine, and collapsible paddle wheels, the Savannah was no doubt an unusual sight. Special not because she was the first steam ship nor the first sea-faring steamer, she was neither of these things; the Savannah was special because she was the first ship with steam power capabilities to cross the Atlantic, making a journey from Savannah, Georgia to Liverpool, England and back. She used both sail and steam in her voyage, relying mostly on sail due to a lack of fuel. 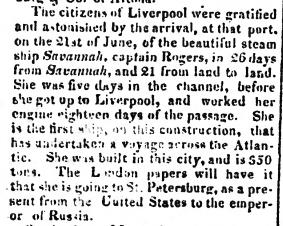 Despite her uniqueness and the general fanfare surrounding her journey, she was a financial failure. People liked to marvel at her freakish hybridity of sails and paddle wheels, but no one dared book passage on her. Upon her return to Savannah and after a failed attempt to sell her to the United States government, the Savannah’s paddle wheels and steam engine were removed, and she was used as a packet to transport goods between New York and Savannah. In 1821, she crashed and sank off the coast of New York. Despite her failure, it would be more than ten years before a vessel would make the transatlantic trip entirely under steam power, proving the Savannah was well ahead of her time.

Visit the Georgia Historical Society to explore archival collection materials such as a copy of the vessel’s log book in Savannah (Steamship) Papers, 1819 (MS 708), Steam Coffin: Captain Moses Rogers and The Steamship Savannah Break the Barrier, the S.S. Savannah Vertical File, and other items such as historical newspapers, journal articles, manuscripts, photographs, and more.